Theatre Review: ’19: The Musical’ by Through the 4th Wall
Productions at National Museum of Women in the Arts
mdtheatreguide.com/2019/11/theatre-review-19-the-musical-by-through-the-4th-wall-productions-atnational-
museum-of-women-in-the-arts/
The cast of ’19: The Musical.’ Photo courtesy of John Meyers.
“Witty dialogue, snappy tunes, and imaginative choreography characterize ’19: The Musical.”
As joyful and inspirational as it is, however, the show does not sugar-coat the long and
arduous battle to secure women’s suffrage in the United States.
Beginning with the Seneca Falls Convention in 1848 and culminating in the ratification of
the nineteenth amendment in 1920, Susan B. Anthony (Brenda Parker), Alice Paul (Katie
Ganem), Ida B. Wells (Millicent Scarlett), and other suffrage luminaries tell the story—with
an unflinching look at the sacrifices, obstacles, and setbacks—of the movement to secure
voting rights for half of the American people.
’19: The Musical’ serves as a timely reminder of women’s struggle for full citizenship, a
story we cannot afford to forget it.
A racially diverse cast highlights society’s progress since ratification, but the narrative also
explores the racial tensions that plagued the movement, and snippets of dialogue
frequently allude to the work left to be done to achieve women’s equality. Contemporary
terms such as “mansplaining,” used to describe President Woodrow Wilson’s (Brian Lyons-
1/2
Burke) interaction with the suffragists, give a modern-day spin to a movement that took
place long before equal pay, workplace harassment, or the #MeToo movement flickered
into society’s consciousness.
With humor and deep sincerity, Brenda Parker (Susan B. Anthony) grabs the audience by
the hand and leads them through the tumultuous battle against a world dead-set on
silencing women. Millicent Scarlett (Ida B. Wells) graces the stage with her soaring and
powerful soprano voice, and Katie Ganem (Alice Paul) embodies the uncompromising
determination that drove Paul to withstand multiple arrests, violence, and torture in pursuit
of universal suffrage. Maria Ciarrocchi expertly portrays the uptight and ladylike Carrie
Chapman Catt who naively insists women can “nice” their way into equality by avoiding
tactics that offend those in power.
Costumes (Jennifer Schwed) are simple and direct. Women wear white shirts emblazoned
with the word “Suffragist.” Male character’s T-shirts are stamped with the word “Man.” In a
particularly inspiring moment, a young girl appears with a T-shirt reading “The Future.” The
set is as uncomplicated as the costumes, creating a sacred space in which this vital piece of
American history can take center stage.
The show’s composer, arranger, and musical director Charlie Barnett provides the piano
accompaniment throughout the evening, nimbly shifting between high-intensity ballads and
up-tempo dance numbers.
Written and directed by Washington D.C. area natives Jennifer Schwed and Doug Bradshaw,
this musical comes at a crucial moment in our country’s history and in the fight to build a
more just world for all people. “19: The Musical” serves as a timely reminder of women’s
struggle for full citizenship, a story we cannot afford to forget it.
Running Time: Approximately 2 hours and 30 minutes with one intermission.
“19: The Musical” ran through November 27 at the National Museum of Women in the Arts,
1250 New York Ave NW, Washington, D.C. 20005. For information about the show, click
here 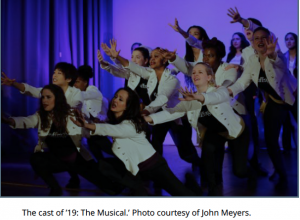