New Musical: When We Get There

I guess we are are in scramble mode, trying to figure out how best to use our creative energy during this Covid time.  I started a new musical in March with two book-writers; Richard Lasser from Seattle and Robert P. Young from Detroit. It is called When We Get There.  It stems from a story I wrote nearly ten years ago, but has been changed and massaged into a new and wonderful piece of theatre by a lot of brilliant work by Robert and Richard. Basically it is a story of four people who drive from New Jersey to march in Selma in what turned out to be “Bloody Sunday” in 1965.  We had a few terrific actors join us for a Zoom table read last week.  We were  fortunate to have Broadway veterans Allison Briner-Dardenne read the part of Rose. Q. Smith played Mary. Erick Pinnick read Terrance and Safiya Harris (pictured) played Dawn. 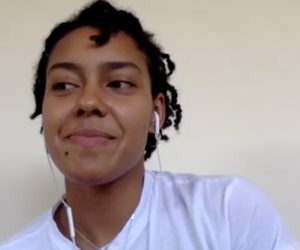 We learned a ton about our small but mighty show.  Once there is theatre again, this show will be ready!